This classic was written in 1897 by Francis P. Church, veteran editor of the now-defunct The New York Sun newspaper. He wrote in response to the following letter:

Dear Editor: I am 8 years old. Some of my little friends say there is no Santa Claus. Papa says, ‘If you see it in The Sun, it’s so.’ Please tell me the truth. Is there a Santa Claus?
– Virginia O’Hanlon, 115 West Ninety-fifth St. 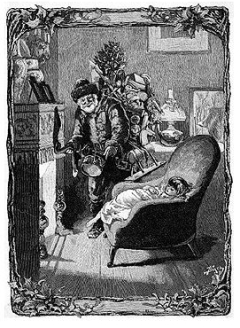 VIRGINIA, Your little friends are wrong. They have been affected by the scepticism of a sceptical age. They do not believe except they see. They think that nothing can be which is not comprehensible by their little minds. All minds, Virginia, whether they be men’s or children’s, are little. In this great universe of ours man is a mere insect, an ant, in his intellect, as compared with the boundless world about him, as measured by the intelligence of grasping the whole of truth and knowledge.

Yes, Virginia, there is a Santa Claus. He exists as certainly as love and generosity and devotion exist, and you know that they abound and give to your life its highest beauty and joy. Alas! how dreary would be the world if there were no Santa Claus! It would be as dreary as if there were no Virginias. There would be no childlike faith then, no poetry, no romance to make tolerable this existence. We should have no enjoyment, except in sense and sight. The eternal light with which childhood fills the world would be extinguished.

The most real things in the world are those that neither children nor men can see. Did you ever see fairies dancing on the lawn? Of course not, but that’s no proof that they are not there. Nobody can conceive or imagine all the wonders there are unseen and unseeable in the world.

You tear apart the baby’s rattle and see what makes the noise inside, but there is a veil covering the unseen world which not the strongest man, not even the united strength of all the strongest men that ever lived, could tear apart. Only faith, fancy, poetry, love, romance, can push aside that curtain and view and picture the supernal beauty and glory beyond. Is it all real? Ah, Virginia, in all this world there is nothing else real and abiding.

This article originally appeared on the editorial page of the New York Sun, September 21, 1897, and was reprinted annually until 1949 when the paper went out of business.

Church married shortly after the editorial appeared. He died in April, 1906, leaving no children.

Virginia O’Hanlon went on to graduate from Hunter College with a Bachelor of Arts degree at age 21. The following year she received her Master’s from Columbia, and in 1912 she began teaching in the New York City school system, later becoming a principal. After 47 years, she retired as an educator. Throughout her life she received a steady stream of mail about her Santa Claus letter, and to each reply she attached an attractive printed copy of the Church editorial. Virginia O’Hanlon Douglas died on May 13, 1971, at the age of 81, in a nursing home in Valatie, N.Y.

Stuart Ayling is Chief Sales Strategist at Marketing Nous. With many years of sales and marketing experience under his belt he's on a crusade to help expertise-based businesses develop their sales capabilities and achieve their goals. Subscribe to his blog to get the latest resources.

Subscribe to the blog for the latest resources, and get a copy of ‘7 Steps to Create a High Performance Sales Team’

Recently on the blog

The week following the 2-day training, the team had already commenced implementing some of the learnings from Stuart’s training.
Camille Johnson, CEO

Sales figures have increased by 20% on last year to date!! The team also continue to pick up new customers.
Sharyn Moran, General Manager

Our sales results have increased since incorporating Stuart’s sessions into our sales conference and this has been during a downturn in the market.
Justin Zakaras, National Sales and Marketing Manager

The content of the sessions was customised to suit our customer interactions, with a lot of preparation on the part of Stuart.
Dr. Sunil Kadri, Head of Sales and Business Development

Thank you so much for a brilliant session on Thursday. I think the format and content was ideal.
Rennie Colston, Sales Director

We had a very positive result from involving Stuart in our Managers Conference last year.
Russell Varley, Human Resources

The training got us thinking more strategically about how the business is structured. It has really built our capabilities as a management team.
Mia Graham, General Manager

Stuart was patient, flexible and knowledgeable. He took the time to truly understand our business.
Helen Zwicker, Executive Officer

The best thing is that I now have a road map of specific marketing activities that can be implemented with confidence.
Donna Cazzolato, General Manager Sales and Marketing

With only one day we had a lot of material to cover and Stuart created a positive learning environment for all involved.
Kylie Kinsella, Sales Manager Australia & NZ

Bad ideas are expensive in business however with Stuart Ayling, it was money very well spent.
John B. Lonergan, Sales Manager

By the next week, sales of this product had doubled from 10% of all new sales to 20%. The extremely cost effective session with Stuart paid for itself within the first week.
Maria Triggs, General Manager

We have already seen a new client on board as a result of the two-day workshop.
Mark Mahoney, Managing Director

Stuart put the sales training across in a way they could accept as a part of our service offering with out them feeling like “salesmen”.
Gary McDonald, Managing Director

We were impressed by the approach of Stuart and the simplicity of the program without the hype generally associated with these courses.
Dirk Kuiper, General Manager

Verified by Sucuri as a safe site

Read the latest on the blog

Looking for something else?

Connect with Stuart Ayling on these social media channels …